Home > Publications > So What? > 12/ Food to offset multiple deprivation

In fatherless, low income households in South Africa, single mothers may use food to offset the absence of fathers and material resources.

In contexts of fatherlessness and multiple deprivation, nutrition may not be the main priority taken into account when food choices are made, because food becomes a social vehicle for meeting all kinds of needs, including social inclusion.

Among low income mothers, food may be perceived as one of a handful of economically accessible modes of achieving the markers of being a ‘good mother’, through the opportunities it opens up for poor mothers to recast themselves as well-to-do, good, caring providers for their children.

Low income mothers care about providing nutritious, healthy meals to their children, yet they may adopt strategies that combine unhealthy foods with nutritionally healthy products to counter the nutritional deficiencies that are inevitable when food takes on compensatory roles.

Many social and economic disparities in South Africa are a legacy of apartheid. They especially affect Black African, Coloured and Indian populations, who make up the majority of the low and lower middle income classes in the country. These low and lower-middle income populations do not have sufficient economic resources to ensure consistent access to quality food, yet high energy-, fat- and sugar-rich processed foods are in abundant supply in cities. This situation has generated a two-pronged nutritional problem in the country—the persistence of undernutrition and the emergence of chronic diseases due to overnutrition, with high stunting (27%) and overweight (13%) rates among children under 5 years old (UNICEF, 2016).

Promoting healthy food is a crucial public health priority for authorities in the country. Several measures are being taken to foster a change of eating habits, including nutrition awareness campaigns and levying taxes on categories of products that are high in sugar, such as soft drinks. The research work upon which this policy brief is based outlines the rationales underlying food choices in lower middle class South African households that are marked by the absence of a biological father and/or a lack of material resources. What is the role of food in these households and how do mothers relate to nutritional recommendations?

Food as a tool to offset socioeconomic deficiencies

Compensating for the absence of fathers

Biological fathers are commonly absent from households in South Africa. Hence, in 2017, 62% of birth certificates did not include any information on the male parent (Statistics South Africa, 2018) and only 34% of children aged 0-17 years live with both of their biological parents. Forty-one (41%) of children live only with their biological mother, even though the household may include one or more other adults (Statistics South Africa, 2003-2018). Fatherlessness is particularly common among Black African lower class populations (Figure 1), and this trend concerned children of several of the women interviewed in this research study. The findings of this research study suggest that multiple deprivation and the absence of a biological father may have a considerable impact on children’s eating habits, as mothers navigate choice-making around food with more than just nutrition and subsistence in mind.

On the one hand, the research suggests that mothers may feel guilty towards their children for having conceived them with a father who does not care for them or participate in their upbringing. They seem to believe that their children are negatively affected by fatherlessness, and feel solely responsible for the atonement of this deficiency, while trying to make up for the paternal absence by being ‘doubly’ present for them. These mothers are therefore often impelled to be flexible, for instance by responding positively to their children’s food preferences or being tolerant when their children do not finish their meal, because they are ever conscious of their children’s double burden of belonging to a low income family and being fatherless. These concerns may play out on children’s plates—resulting in more pleasurable but less nutritious meals that mothers feel compensate for the other absences in their children’s lives and over which they have no control.

On the other hand, in order to meet socially accepted ’good mother’ standards, mothers of children whose father is absent may voluntarily adopt an archetypal parental role, which implies that they ’cannot exist’ apart from their children (i.e. the so-called ’motherhood myth’). This selfless attitude permeates all aspects of their lives, including food practices such as eating out or enjoying a meal without their children, which may be viewed as a transgression or even an act of neglect. This gives rise to a phenomenon whereby mothers’ food practices and their children’s food habits are in symbiosis.

Compensating for a lack of material resources

The compensatory role of food is not limited to fatherless households. In this study, the use of food to compensate for multiple deprivation was also more widely observed in families with low economic resources, often in Black African, Coloured or Indian communities. Because of the persistence of apartheid spatial geography, these families generally live on the outskirts of cities, in townships that are home to low-income, poverty stricken and crime ridden ghettos. As in other communities, children’s happiness is a source of concern in most families in these settings, thus making children ’happy’ despite their living standards becomes a priority for many mothers. Due to the material scarcity that marks most of these households, food becomes the most affordable way to make children happy, so mothers regularly offer their children the foods they prefer, despite the fact that such products may not always be healthy. In a world of such scarcity, where children are regularly denied other material goods that they need and want, luxury food items become one of the few means through which mothers can readily say ’yes’.

The weight of nutrition in mothers’ food choices

In this study, respondents made a distinction between food for ’well being’ (starchy food, high-fat food, American fast food, sweets, etc.) and food for ’health’ (especially fruit and vegetables); this distinction underpinned much of their choice-making patterns regarding food. ’Well being’ food products are promoted for their emotional, psychological and social roles. They convey feelings of happiness or pleasure. Some of these foods are positively associated with ’White foods’, which are expensive but remain attractive for Black and Coloured people because they are illusively associated with an upwardly mobile lifestyle. ’Health’ food does not seem popular enough to be a staple product. Several respondents also pointed out that this food is not always affordable, thus curbing long-term consumption. South African people are nevertheless fully aware of messages concerning good nutrition, and respondents claimed that this awareness generated feelings of failure and guilt because they were bound to fail to consistently maintain diets that incorporated only these foods.

Children’s food preferences are geared towards ’well being’ products, which are considered unhealthy and of low nutritional value. Mothers who allow their children to eat these products may feel guilty about it—they are aware of the recommendations and strive to comply with them to avoid nutritional deficiencies in their children. Yet there is a tug-of-war between mothers’ intention to comply with good nutritional standards and their duty as ’good mothers’ to offset other economic and family deficiencies in their children’s lives. Allowing their children to eat their favourite products—although they may be considered bad—was therefore not poorly regarded by the surveyed mothers.

This is also a way for them to express a ’modern’ motherhood parenting style—by giving their children a choice, they avoid perpetuating the patterns of food restrictions and constraints they experienced in their own youth. In their representations, forcing a child to eat products that he/she does not like is counterproductive as there is a risk of triggering long-lasting disgust and immediate resentment. When mothers are less severe, they create an enabling environment for negotiation with their children.

While not being overlooked, nutritional concerns are certainly in tension with other priorities, which are sometimes considered more urgent (Figure 2). In practice, many mothers try to meet nutritional recommendations through a strategy whereby healthy foods (e.g. salads or yogurt) are combined with unhealthy foods (e.g. burgers or soft drinks). The aim is to make the consumption of ’well being’ products more acceptable in terms of nutritional standards. This balance can be achieved at a meal scale (e.g. by adding salad and a slice of tomato in a burger) or at a daily meal schedule scale by alternating healthy and unhealthy meals (e.g. having a yoghurt or drinking tea as a snack after a very rich lunch). 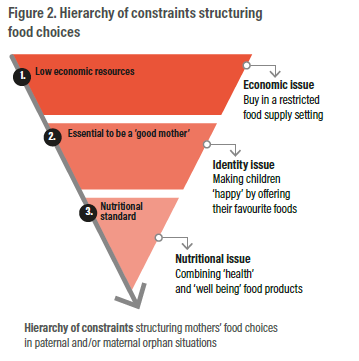 In 2016, 28.3% of South Africa’s population was obese (WHO, 2017), so malnutrition prevention is a major public health thrust. Yet the findings of this research study highlighted that nutritional issues may take a back seat to social and economic issues when it comes to household food preparation—food is not only used to make up for nutritional deficiencies, but also seems to be a way for mothers to manage their guilt and offset the absence of fathers or material resources. These results suggest the need for measures that take emotional and material issues related to food into account to combat malnutrition. Indeed, mothers, and parents in general, are aware of nutritional recommendations but they can generate tensions by making them feel even more guilty. Striving to reconcile nutritional injunctions and compensatory practices through food seems essential to foster the latter and enhance public health.

This research study was conducted between January and December 2017 through a field survey in the cities of Cape Town, Port Elizabeth, Johannesburg and Pietermaritzburg [1]. Using a qualitative approach, 48 individual interviews and 15 community interviews (groups of 5-10 people) were conducted among male and female city dwellers in the 20-64 year age range. The profile of the panel of survey respondents reflects the ethnic and socioeconomic diversity of South Africa. While respondents identified themselves as Black African (30%), Coloured (30%), Indian (20%) or White (20%), the Living Standard Measure, i.e. the main tool for measuring living standards in South Africa, was used to assess their socioeconomic status. On a scale of 1 to 10 (where 1 is the lowest socioeconomic status and 10 the highest), respondents were divided into categories 5-6 (lower middle class) (40%), 7-9 (middle class) (40%) and 10 (upper middle class) (20%). The results presented in this policy brief are largely based on an analysis of testimonies from mothers in categories 5-6, while also drawing on the standpoints of all respondents to describe the health-pleasure dichotomy regarding food in South Africa.

Marie Walser wrote this executive summary based on a report on the results of a research study conducted by Yanga Zesizwe Ncebazakhe Zembe Zondi with the collaboration of Chelsie Yount-André.

[1] The data presented in this article are from a research study involving a collaboration between the University of the Western Cape, the French Agricultural Research Centre for the Developpement (Cirad), Danone South Africa and Danone Nutricia Research.