Home > Publications > So What? > 9/ Rethinking our food solidarity commitments

Food solidarity is overshadowed by food aid in France.

Food precarity is still managed via food aid while not fostering empowerment.

Questions were raised during the French National Food Conference on the respect for human dignity in dealing with food precarity and on the widening gap between populations targeted by food aid schemes and those in need.

A public consultation was conducted in France between July and November 2017 on the food theme within the framework of the French National Food Conference (États généraux de l’alimentation or EGA). Food precarity was one of the 10 major issues addressed. The debates proceeded through two mechanisms: first via a workshop attended by 60 actors (NGOs, elected officials, economic stakeholders, public operators, social partners and experts), and secondly through an open online consultation entitled ’How to promote the broadest possible access to sufficient healthy food?’. The workshop (No. 12) was entitled ’Combating food insecurity – ensuring that everyone has access to sufficient high quality food in France and worldwide’. Four meetings were held, one of which was devoted solely to global food insecurity. This article contextualizes the discussions of Workshop 12 (in which the authors participated) and provides an analysis of the exchanges and deliverables.

The way food precarity is managed nowadays in France stems from a long history—primarily involving ‘hobo’-based representations of food precarity, in reference to people who are not part of a family social environment, do not know how to cook, have no fixed address and therefore no chance of food self-sufficiency. Assisting these people has involved providing them with prepared meals, soups and hot dishes.

The food aid system hinges on this ’man in the street’ depiction of food precarity. Since the 1980s, the French government has been involved in organizing this aid by financing part of the food supply of charitable associations (Paturel, 2013; Retière and Le Crom, 2018). The focus has been on the distribution of food, especially that from European stocks generated by Common Agricultural Policy (CAP) production-support schemes. Food aid distribution has been extended to include low-income families receiving welfare benefits. This has led to the structuring of an economic sector whereby the organization of agricultural production and agrifood industry stakeholders and distributors are supported by direct and indirect French and European Union (EU) subsidies.

In 2011, following a market obstruction complaint lodged by Germany and six other EU countries concerning the European Food Aid Programme for the Most Deprived Persons (PEAD), a European Court of Justice ruling led to revamping of the financing and integration of this scheme into the European Social Fund to support the social policies of EU Member States. The latter were then forced to find additional funding. France—in keeping with its food product distribution approach—proposed to combine its food aid strategy with another concern, i.e. combating food waste. Since February 2016, the Garot law has encouraged food supply actors to organize the transfer of their unsold food goods to charitable associations, which in turn may distribute these foods to needy families. Food aid associations have had to develop skills in managing stocks, supply and distribution flows in response to this shift in food aid organization. The Garot law has also fostered the emergence of a myriad of community groups to recover such food products under a ‘zero-waste’ stategy. This has led to high competition between these groups, but also with incumbent food aid providers. 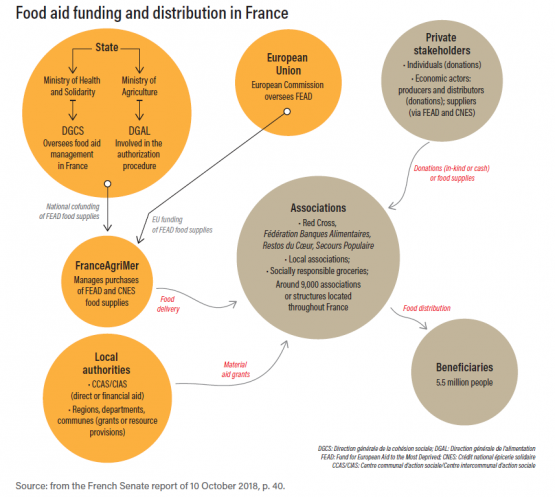 Food solidarity continues to be based mainly on food aid—from soup kitchens to combating food waste and making optimal social use of unsold food. This form of aid-oriented solidarity is now out of step with the latest poverty management strategies. Discussions on social work since the 1970s have begun to shift away from the need for aid to be more focused on empowering people. For nearly 50 years, this change of outlook has been marked by political recognition of the poverty issue. Being poor means not having sufficient resources—a situation that should be offset by transfers—but it also means lacking power to act. Moreover, inequality in access to adequate resources to meet everyday needs (e.g. food, clothing, healthcare, housing, education, etc.) is fundamentally unfair. This has been reflected, for example, in the emergence of housing rights, whereas the food sector has yet to be affected. Aid is still the main model upon which food solidarity is based, including in the most modern forms (socially responsible groceries and food baskets, etc.). The right to food is acknowledged and even supported by France in international debates, whereas it has not really been implemented within the country.

The consideration of food as an issue of public concern is still hampered by the conventional patriarchal thrust of the analyses. Technical and commercial aspects are assessed in the public sphere, while the social aspects are addressed in the domestic sphere, particularly through education and social support. Note also that the question of gender relationships with regard to food is seldom raised in debates on sustainable food or on future food scenarios during EGA workshops, etc. In many conferences, food and nutrition issues are mainly discussed amongst men on the stage and amongst women behind the scenes!

Social work has also been shifting towards a poverty management approach since the 2000s. The challenge is to train and advise people living in poverty so that they will be better able to manage their budgets, food, job hunting, etc. These people are now required to participate in such initiatives to improve their material life and qualify for aid. The issue of matching incomes and quality food product prices (Darmon et al., 2014) is pivotal to this social assistance system and helps justify it. Food distribution is generally supplemented by social, individual and collective support to help people in vulnerable situations reintegrate mainstream society while combating social isolation: welcoming and listening, providing information on rights, cooking classes, leisure activities, health training, nutrition, gardening, etc.

This approach has had a dual effect. First, it has shifted the focus onto precarity management practices by the poor, thereby revealing their creativity and ability to generate social innovations, while also challenging the image of poor people as being resourceless. The work of the French NGOs Mission régionale d’information sur l’exclusion, ATD Quart Monde and the Observatoire des inégalités has highlighted how the poorest people are coping and coming up with solutions. Secondly, however, this management-oriented approach has made poor people realize that there is a substantial rift between them and the prevailing social norms. This is particularly the case with regard to nutrition, where the constant reminder of inherent nutritional obligations—particularly among populations prone to new forms of malnutrition such as obesity—has given rise to feelings of guilt or rejection of these norms. This attempt at exercising the power to act on the actions of others, according to Foucault’s maxim ‘conduit des conduites’ (Foucault, 2004), mitigated the emancipation aspirations that emerged in the 1970s and instead fostered the notion of autonomy as a form of individual empowerment.

What about the French National Food Conference?

Discussions during workshop 12 revealed that many stakeholders endorsed the need to rethink the food precarity management strategy in France. Moreover, despite the workshop title, these deliberations took place in a framework focused more on ’food precarity’ (a notion shared by all) than on ’food insecurity’, whose definition may vary between stakeholders (Barbier, 2005; Paturel, 2017). The following two points were regularly discussed.

The first point concerns the inclusion of the dignity issue in food precarity management. Giving the ’dregs of society’ (as poor people are sometimes called) waste from the consumer society is problematic. For example, the fact that commercially recalled lasagne containing horse meat was recycled by some charities caused a great deal of controversy. These products were considered unworthy for ’normal’ consumers although they were edible from a health standpoint and had no nutritional defects. Giving these products to poor people to avoid wasting them implied a hierarchy of food functions. By the same rationale, the main priority of poor people would be to fill their stomachs, with other fundamental functions of food—such as pleasure, social bonds and identity—taking a back seat. The challenge should be to provide them with access to ’normal’ food that is not specifically targeted for them while ensuring that they have the right to the same products as others, i.e. products worthy of being consumed by everyone.

Mindfulness of the food dignity issue again raises the issue of everyone’s right to quality food. In other countries elsewhere in the world, after testing food aid, food solidarity has taken different forms that specifically take the social and identity implications of food into account. Budgetary aid schemes have been developed to enable vulnerable families to buy the food they want anywhere, anytime and without stigmatising or humiliating them. This approach comes up against considerable resistance in France because of the overall drive to enhance the win-win ’food aid + combating food waste’ system.

The second point concerns the ever-widening gap between populations targeted by food aid schemes and those in need. A growing number of people who would be entitled to food aid are not taking advantage of it. Conversely, in the ’race for numbers’ (5.5 million in 2018), the increase in the number of aid beneficiaries means that a majority of these people are obtaining food aid, in turn depriving them of access to food via other channels. Many new forms of community food solidarity are thus emerging that are micro-associative and below the radar of public authorities because they are informal, silent and not certified. These forms of solidarity do not necessarily include food aid, but may involve budgetary aid through bulk purchases at cheaper prices. They sometimes also include mechanisms that avoid the need for people to disclose their poverty status, to justify their limited resources or to make a commitment to livelihood-optimizing initiatives. It is now essential to characterize these practices, highlight how they promote the inclusion of a diverse range of people who are usually overlooked by the formal system, as well as how they give rise to new forms of solidarity that revitalize the notion of citizenship. This will help bring about a necessary reform of our food solidarity strategies.

Various avenues of reflection have emerged that have highlighted the need to enhance the definition of food precarity, especially by integrating the notion of food system sustainability, while ensuring that this precarity is taken into account in scientific ecological transition discussions, as well as in local food projects. Moreover, there is a need for unconditional long-term support for all social solidarity initiatives that foster access to food, provided that they are coordinated by the people concerned or their representatives. Finally, it is crucial to enforce everyone’s right to sustainable food.