16/ Mapping inequalities in access to food outlets in Greater Montpellier

Food outlet mapping enables local authorities to identify populations in their territory that do not have access to a nearby food shop.

In Greater Montpellier, there are major differences in physical access to food shops depending on the distance from the city centre. Communities on the remote periphery are the furthest away from shops selling fruit and vegetables.

The level of access to these shops does not depend on the standard of living in the neighbourhood. Yet some low-income neighbourhoods are underserved.

For several years, research has highlighted that food behaviour is not driven solely by consumer characteristics but also by the foodscape, i.e. the geographical food supply configuration—shops, markets, etc. (Vonthron et al., 2020). In the United States, research has shown that a lack of physical accessibility to healthy foods, particularly fruit and vegetables, is often conducive to obesity. The ‘food desert’ concept was developed to designate neighbourhoods where there is no access to healthy food at affordable prices. The term was then gradually broadened to encompass neighbourhoods without any food shops. Otherwise, the ‘food swamp’ concept refers to areas where the food supply is abundant, but dominated by foods and beverages that are unhealthy when consumed in excess (fatty, sweet, salty and ultraprocessed products).

This issue of physical accessibility to food has resurfaced with the advent of the COVID-19 crisis, which has led to limited population movement and lockdown. Some people have found it difficult to buy food nearby their homes due to a lack of food outlets in their neighbourhood. More generally, consumers have often changed their food shopping practices while also becoming aware of the reality of their foodscape. A novel food supply trend is now flourishing everywhere—online ordering. This is transforming the foodscape and could lead to the reconfiguration of food supply practices.

These considerations illustrate the need to characterize foodscapes so as to enhance their consideration in land-use planning policies, particularly in urban planning. Yet local authorities do not have easy-to-use tools for this characterization task. At best they may know the number of shops per municipality and their addresses, as provided by the ODIL local location assessment application of the French National Institute for Statistics and Economic Studies (INSEE), based on the Sirene official online database of registered enterprises and establishments. This simpler but less precise tool helps locate shops, which are key elements in the foodscape (see Methods).

The mapping carried out facilitates identification of neighbourhoods that at first sight (given the non-exhaustiveness of the databases used) seem to have no local fruit and vegetable shops. This identification also facilitates calculation of the proportion of the resident population with access to such local shops, and analysis on how this proportion varies according to the proximity to the city centre and the income level in the neighbourhood.

Inequalities in access according to distance from the city centre

The study area was divided into 200 m grid squares for which INSEE can provide the documented economic characteristics of the residents. Circles with a radius of 300 m (as the crow flies, or slightly more if the streets are followed) were drawn around each shop, corresponding to areas where the shop was considered accessible on foot (see Map 1). On this basis, the proportion of the population living within 300 m of a fruit and vegetable shop was calculated for each grid square based on the following formula: The results revealed major differences in accessibility to food shops according to the distance to the city centre. The downtown core of Montpellier is of course very well served (ring 1). But this is much less the case as you get away from the centre. In communities bordering Montpellier and Castelnau-le-Lez (ring 3), around 70% of the population lives more than 300 m as the crow flies from fruit and vegetable shops. Access to supermarkets and hypermarkets also decreases in this third and especially in the fourth ring, i.e. suburban communities remote from Montpellier. In Greater Montpellier, half the population lives more than 300 m from a fruit and vegetable shop, while 44% live more than 1 km from a supermarket or 3 km from a hypermarket (see Table). These results suggest that there are more food deserts in periurban than in urban areas. As highlighted in the international literature, this lack of nearby food shops is especially problematic in low-income neighbourhoods. What is the situation in Greater Montpellier? To answer this question, we considered the average income of inhabitants (calculated by dividing the sum of the incomes by the population in each grid square).

Heterogeneous access regardless of the income level in the neighbourhoods

We found that access to fruit and vegetable shops was slightly lower in wealthier (usually residential and periurban) neighbourhoods. But above all we noted very high heterogeneity with regard to situations.

Map 2 identifies food deserts, i.e. portions of grid squares in which residents are in the first income bracket (those with an average income of less than €21,000/per capita/year) and living more than 300 m from a fruit and vegetable outlet. These food desert areas were not very extensive and were mainly located in neighbourhoods on the outskirts of Montpellier, but the number of inhabitants in these areas was often substantial. Food deserts were seldom in neighbourhoods identified as priority areas under the city policy and which would require specific attention. 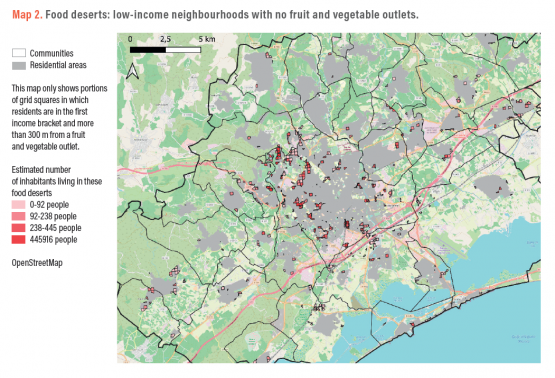 Other low-income neighbourhoods did have fruit and vegetable shops, so they were not identified as food deserts on this map. That does not imply, however, that the local food supply was always suitable and accessible, considering the prices and quality of products in small convenience grocery shops not intended for regular food shopping. People living in these low-income neighbourhoods were nevertheless more dependent on this local supply because they were less mobile than better-off and generally motorized households whose members therefore did not really consider the physical distance to the shops as problematic.

Other results of the Surfood-Foodscapes project revealed that the emergence of local shops would be appreciated by most inhabitants, but that the current distance to shops is not problematic for the majority of households, except with regard to open-air markets (see So What? No. 15 ‘Food outlets in Greater Montpellier—physical access and consumer shopping behaviour’). Inhabitants mainstream their food shopping into their travel routines. They also choose shops according to other conveniences (parking), the diversity and quality of products, prices, atmosphere or social interaction, etc.

Inhabitants awareness of their foodscape was enhanced during the lockdowns linked to the COVID-19 crisis (Chiffoleau et al., 2020). This foodscape was actually modified: some open-air markets closed in the spring of 2020; physical distancing constraints led to queues; new sales outlets emerged and online trade skyrocketed. Many respondents frequented local shops or stated they suffered from not having any. This shop location issue, which has been relatively overlooked so far, should be taken into greater account in urban planning policies. The maps presented here represent a first easy-to-build support, which could serve as a basis for discussion with inhabitants in the framework of participative urban planning approaches.

What data sources should be used to locate food outlets? In the Surfood-Foodscapes project, the study area encompasses the city of Montpellier and 42 surrounding communities, i.e. more than the 31 communities hosted in the metropolitan region. Within this area, a comparison was made using data from the OpenStreetMap collaborative map and the Sirene business directory address map. The findings revealed that the reliability of these two data sources was similar to that of databases used in other countries. Some businesses identified in the field are missing from OpenStreetMap, while closed businesses may remain listed for some time in Sirene. The first data source is therefore sometimes incomplete, while the second may be excessive. The commercial food supply mapping was carried out using each of these data sources, supplemented by additional data and field checks. As it is very user friendly, here we present the results from the OpenStreetMap database, supplemented by Google Maps and the Montpellier Méditerranée Métropole BoCal database, which lists shops selling ‘good local’ food products. The effects of the landscape or urban food environment on food styles and their sustainability. The case of Montpellier.