Nutritional health programmes that operate at local level and involve all community members are particularly effective in reducing child undernutrition.

International aid is useful when allocated to funding these types of interventions, which aim to improve individual capabilities and increase human well-being within communities.

Poverty is more complex than a lack of income to meet one’s basic needs. It is multidimensional and can manifest as deprivation of the basic capabilities that allow an individual to be educated, well nourished, housed in good conditions, or yet healthy, among other things (Alkire and Foster, 2011). According to the global Multidimensional Poverty Index (global MPI) which accounts for these multiple overlapping forms of deprivation, 1.3 billion people across 101 countries, that is, 23.1% of the population of these countries, live in acute multi-dimensional poverty (OPHI and UNDP, 2019). By contrast, if poverty is measured as the percentage of the population living on less than US$1.90 a day, 9.1% of the world’s population is affected (World Bank data in 2017 [1]).

More specifically, the global MPI provides insight into individuals’ poverty level based on ten indicators or areas of deprivation. One indicator identifies nutritional deprivation when an individual lives in a household in which any person under 70 years of age is undernourished.

According to this indicator, 14.5% of the global population is poor and deprived. And while 2% of these people live in the Latin America and Caribbean region (LAC), Guatemala accounts for the greatest share in the region after Mexico (19.4%).

One in two children are affected by chronic malnutrition

Guatemala is the most populous country in Central America, with approximately 15 million inhabitants in 2018, 50.5% of whom live in rural areas. The country is characterized by high biodiversity—spanning 14 ecoregions with five different ecosystems—, as well as ethnic, cultural, racial and linguistic diversity. According to the latest National Maternal and Child Health Survey of 2014/2015 (ENSMI in Spanish), approximately 44.4% of mothers are indigenous of full Amerindian descent, which represents the third highest percentage in the LAC region after Peru and Bolivia. Although Spanish is the official language, at least 24 Mayan languages exist, each belonging to an ethnic group, such as K’iche’, Q’eqchi, Kaqchikel, and Mam.

The country is ranked as an upper middle-income country and its gross national income per capita was US$4,610 in 2019 [2]. Yet poverty and inequality are still highly persistent and among the highest in the LAC region: 28.8% of the population live in multidimensional poverty, the largest proportion in Latin America after Haiti. One of the most pressing problems is the very high rate of child undernu-trition. One in two children under the age of five face chronic malnutrition and 12.6% are under-weight. These rates are among the highest in the LAC region and the world. The greatest levels are found in the western province of the country, where most of the indigenous population lives. The percentage of children under five who suffer from chronic malnu-trition is as high as 60-90% in some municipalities, whereas the average in the rest of the country does not exceed 40% (Figure 1). 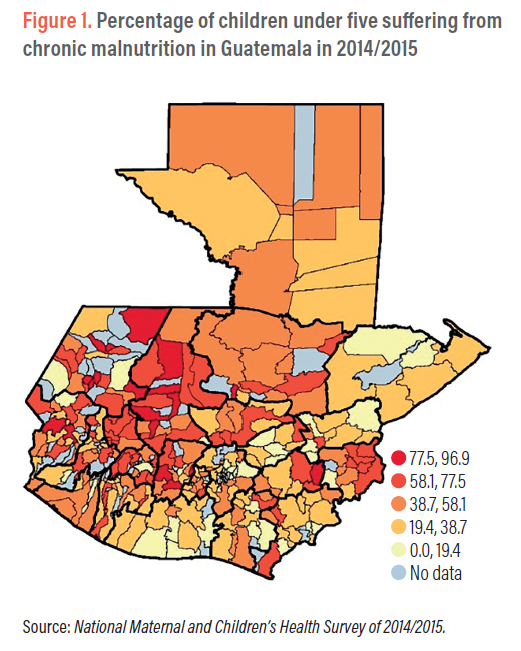 The agro-export sector as a factor aggravating child undernutrition

he current agrarian situation is the result of land grabbing, a historical process that led to 36 years of civil war and agrarian conflict from 1960 to 1996. Today, access to arable land is highly concen-trated. Approximately nine out of ten farmers are smallholders who together farm only 21.9% of the agricultural land, with an average of two hectares per property. Conversely, the 1.9% of commercial farmers, in other words those growing crops exclu-sively for export, own 56.6% of the agricultural land, with an average of 137 hectares per property (data from the last agricultural census of 2003).

The agricultural sector is thus characterised by a strong duality, with on the one hand a relatively recent export sector based largely on sugar cane, African palm, coffee, cardamom and banana crops, and on the other hand a more traditional sector, less productive but far more vital to indigenous and peasant families, involving mainly maize and bean crops.

The staple foods in Guatemala are maize tortillas and frijoles volteados. However, for more than a decade, African palm crop has been the new driver of national agricultural production, with a 17.3% rise in hectares farmed per year since 2003 and a 20% increase in annual exports in tons since 2006. While African palm crop yields have increased to a compet-itive level on global markets, the yields of staple crops are stagnating. The country has been increasingly relying on maize imports since the 2000s, to the point where in 2015 this staple of the Guatemalan diet became one of the top eight import commodities. The expansion of African palm farming initially replaced cotton plantations and cattle farms in the southwestern region. However, it is evolving into the purchase and forced dispossession of communal and family land held by the indigenous population, both in this region and in the north of the country. Moreover, African palm expansion has recently led to the dredging of rivers and the misuse of water resources. The dispossession of land and access to water not only causes a breakdown of families’ and communities’ established ways of life, but also jeopardizes their access to sufficient food and increases the risk of undernutrition, particularly for the most vulnerable populations such as children and women (De la Roca, 2019) [3].

Results from national surveys show that the aggressive expansion of African palm crop in the southwestern region of Guatemala has increased the probability of children under five suffering from chronic malnutrition by 6.1 percentage points, or 12.4% compared to the chronic malnutrition rate among children in the rest of the country before this expansion began (see Methodologies). The nutri-tional impact is particularly observed as delayed growth (stunting) in children aged two to five. This reflects repeated poor nutritional intake during the first thousand days of life, when children grow faster and require higher nutritional intake, adequate healthcare, and a good environment in order to reach their full growth and development potential. During this period, if their nutritional intake is insufficient, children are more vulnerable to chronic malnu-trition and to irreversible consequences, such as an increased risk of disease and death, delayed mental development, poor school performance, and reduced intellectual capacity (Cashin and Oot, 2018).

To address the growing challenge of child undernu-trition, local institutions such as the FUNDAP foun-dation4 are working with communities to strengthen the capacities of mothers and families. For example, the Voluntarias en Salud (Health Volunteers) training programme provides participants (90% of whom are women) with specific knowledge on women’s health, fertility, pregnancy, childbirth, new-born care, and mother and child nutrition. Once trained, these volunteers run a counselling service within their communities called Ciclos de Recuperación Nutri-cional (Nutritional Recovery Cycles). These cycles are designed to improve mothers’ knowledge about dietary practices and child health, provide food and vitamins for their children, and measure the chil-dren’s growth monthly for six months.

The analyses conducted show that the nutritional health status of children under five improves when they complete a full cycle. Three anthropometric indicators were measured: stunting (chronic malnu-trition or low height for the child’s age), wasting (acute malnutrition or low weight for the child’s height), and underweight (the combination of the first two indicators or low weight for the child’s age), distinguishing between moderate and severe health conditions for each indicator. Figure 2 shows the probability of a child facing one of these three conditions of poor nutritional health at each visit, compared to the initial visit (Visit 0). We can observe that this probability decreases with each visit across all three types of undernutrition.

Similar programmes in other parts of the world have also proven effective in improving children’s nutritional health. For example, the MainMwana programme in Malawi in 2005 significantly improved not only child nutrition, but also household food consumption and, as a result, overall family health (Fitzsimons et al., 2016). 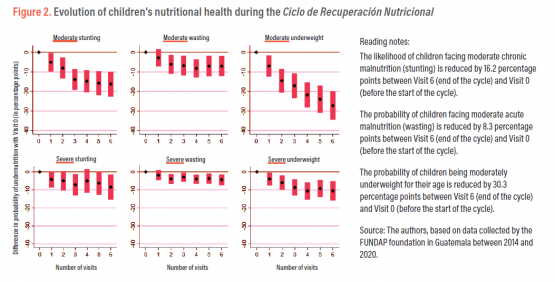 Funding for this type of programme

Although poverty in general appears to be decreasing over time, much effort is still needed. In this respect, official development assistance has traditionally been identified as one of the main levers for reducing poverty around the world. The amount of aid received by countries has increased since the first wave of funding in 1960, reaching a total of US$160.8 billion in 2017. Yet poverty figures remain high and unevenly distributed across the different regions of the world. This has led many researchers to analyse the effectiveness of aid, without reaching conclusive results: several empirical challenges stand in their way, including the availability of reliable and detailed data on additional factors (other than lack of income) affecting people’s well-being. Data from the Oxford Poverty and Human Development Initiative (OPHI) on multidimensional poverty in 64 countries show that higher amounts of aid received lead to lower levels of multidimensional poverty, while their effect on income poverty is not signifi-cant. Thus, encouraging official development assistance to sectors and activities that contribute to human well-being remains essential in many econo-mies such as that of Guatemala. However, rethinking the country’s agro-food production model remains a priority, particularly with a view to strengthening food sovereignty.

This work highlights the urgent need to rethink Guatemala’s agro-food production model, by better integrating indigenous peasant farming activities that support more sustainable agriculture, respectful of natural resources and people. Moreover, official development assistance could play an important role in improving the nutritional health of children, provided that it commits to funding projects and policies at local level that aim to improve people’s capabilities surrounding education, food, housing and/or health, among other things, with a view to enhancing human well-being within communities. This work thus suggests several pathways for moving towards sustainable development in Guatemala, so that every person, and in particular every child, can live with dignity.

The work presented is based on several types of data: macroeconomic data on 64 countries, survey data from Guatemala, and individual data from the FUNDAP foundation in Guatemala. Three main methodologies were used. The first compares the differences in the probability of a child experiencing undernutrition when living either in the southwestern region or in the rest of the country, before (1999-2009) and after (2010-2015) the aggressive expansion of African palm farming began in this specific region. The second methodology studies the evolution of the probability of a child experiencing undernutrition from their first visit to the Ciclo de Recuperación Nutricional (Nutritional Recovery Cycle programme) and at each of the six visits of the cycle (between 2014 and 2020). The third methodology uses an instrumental variable to analyse the relationship between the average amount of aid received from the United States by 64 countries during the 1946-2000 period and the average poverty levels observed during the 2000-2014 period.