6/ Sensory pleasure and mindfulness, allies of a healthier diet

Sensory pleasure can be aligned with a healthier diet—neuroscience and marketing show us how the hedonic network is stimulated.

Food consumers tend to favour quantity over quality, spurred by the increase in food portion sizes and the high price per kilo of small portions.

Eating enjoyment can be maximized by eating less and more slowly (savouring).

Hedonic imagery can enhance the anticipation of consumers’ pleasure.

The food industry can help make a positive shift towards healthier consumption habits.

The thermostat reads 30°C, and you are relishing at the thought of drinking a cold glass of lemonade. In fact, the same areas of the brain are activated whether you are actually drinking, imagining drinking or watching someone else gulp down their drink. We feel pleasure and satisfaction at the mere hint of an action. Imagining makes us feel, and in turn feeling makes us believe. Marketing research uses this information to gain insight into our eating behaviours and taps into the simulation capacity of our brains while demonstrating that the anticipation of food’s sensory pleasure can help reduce the quantities consumed. Eating less and taking more time in the process may also boost eating enjoyment. 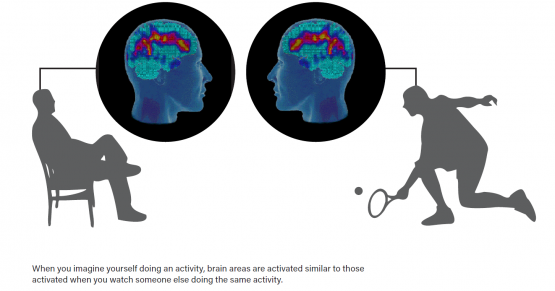 Marketing and neuroscientific research highlight the links between food expectations, packaging and behaviours. There is also a growing interest in pleasure as a relevant focus of research, which can no longer be solely confined to sensory aspects.

The biological, social, hedonic and cultural needs of food consumers must be taken into account when processing raw materials into food commodities. But how can this be done and how can we deal with the fact that taste tends to override health concerns when consumers make food choices?

The health argument in marketing

Humans have a rather binary approach to food, viewing it as either healthy or unhealthy, regardless of the amount consumed. So-called ‘diet food’ or ‘low-fat food’ is also often assumed to be tasteless—so food marketers may decide not to showcase any nutritional improvements in a product for fear that consumers might imagine a loss of flavour.

Consumer research shows a ‘health halo effect’, with individuals inclined to consume higher quantities of low-fat products. One experiment on the impact of labels (Wansink and Chandon, 2006) found that overweight individuals consumed 46% more chocolate candies when they were falsely labelled as ‘low-fat’ compared to when they were labelled as ‘regular’. Moreover, the industry may eliminate all fat from a product and replace it with sugar or other ingredients, thereby keeping the same calorie content.

Many brands stress the nutritional quality of food ingredients, but health is still a minor argument in driving consumption habits, in contrast to the taste and price. The purchase environment and the consumer’s sociocultural background shape the impact of the different health claims (‘high content of this’, ‘low content of that’, ‘good for this’, etc.). The overall setting also determines the different factors that consumers take into account when making food choices (background music at the dining and/or food buying location, medical provisions, etc.).

Neuroscientists have highlighted mechanisms linking pleasure and food. Our thoughts are embodied, meaning that they activate our senses and emotions. Just reading the word ‘chocolate’ will trigger feelings within us, which is not the case for computers or any form of artificial intelligence. Medical imaging techniques enable us to observe how our brain and body respond to different emotions. For instance, a hedonic pathway emerges when food that we like is presented. Food-related stimulation induced by our environment is often studied via marketing science. Our choices are dictated by various conscious or unconscious representations, enriched by our food culture and the underlying rules, norms and values.

The hedonic sensory imagery method seeks to highlight the importance of pleasure through descriptive imagery of food tastes, flavours and textures, or by encouraging consumers to recall their past hedonic food experiences. This strategy encourages people to prefer smaller food portions. People clearly get more enjoyment and are even ready to pay more to consume these smaller portions (see box opposite). 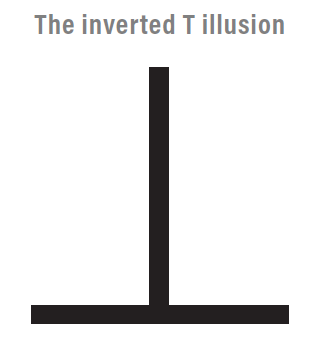 The brain may be tricked by some stimulations—if we are shown a drawing representing two lines of equal size forming an inverted T, based on the orthogonal norm assimilated at an early age, the brain will view the vertical line as being longer than the horizontal one (90% of people have this illusion). However, this phenomenon is not an anthropological invariant. Research has shown that the inverted T illusion does not apply to some Asian steppeland communities. Illusions are therefore influenced by our history, culture and environment, which in turn determine our skills and beliefs.

During a meal, reward pathways are activated via information acquired visually or through tastes and smells, etc. This reward system triggers positive emotions—we may feel great satisfaction when we fulfil a need, e.g. when we drink water to quench our thirst.

Research on the quest for food pleasure has given rise to the alliesthesia concept, whereby the intensity of a stimulus can vary according to the state of the internal environment. For example, eating sugar is all the more enjoyable if the consumer has a low blood glucose level, which leads to serotonin production.

The enjoyment of eating also results in memorization of the experienced pleasure. It is now known that, far from being solely influenced by physiological factors, satiation is highly impacted by the consumption memory as well. If people are encouraged to better remember their consumption experiences, particularly with respect to variety, they will be ready to wait longer before eating again. This effect persists even when consumers just have the impression of more easily remembering their own consumption habits, regardless of the accuracy of their memory. To facilitate memorization, we can for instance consciously say “this glass of wine is very good”, whereas nothing will be memorized if we just drink or eat without thinking.

Sensory pleasure is maximal at the first bite and then subsides. The overall retrospective evaluation depends on the average pleasure, not the sum of pleasures from every bite. When we eat a large portion, the last bites are not as pleasant as the first ones, thus lowering the average pleasure of the entire meal.

Large portions are attractive for two main reasons: the certainty of feeling sated and of “getting your money’s worth.” Consumers—under a gift/counter-gift rationale—wonder whether their hunger will be satiated considering the amount that he/she has spent for the meal.

We are constantly being offered a wide variety of appetizing and ready-to-eat foods due to the expansion of sales outlets (gas stations, etc.) and the high amount of food showcased in the media. This phenomenon can lead people to eat and get pleasure independently of and beyond their actual energy needs. Food portions increased in size over the course of the 20th century, and the resulting ever more attractive quantity/price ratio seduces consumers. There was, for instance, only one beverage size (19 cl) sold during the first 60 years of Coca-Cola’s history, whereas a children’s size Coca-Cola in a fast food outlet is currently 25 cl, which is larger than the previous adult size drink. Moreover, the average size of a Coca-Cola at McDonald’s in the United States (62 cl) is larger than a large size in France (50 cl). Just being aware of the existence of these huge portions shifts our view and definition of a normal portion, with small formats (already too large) becoming sensible.

Many researchers agree that the increase in the extent of the food supply is one explanation for the rise in obesity cases—marketing has certainly contributed to the degradation of eating habits and overconsumption. For instance, food portion sizes have markedly increased over the last 30 years, thus contributing to the obesity crisis and food waste. Many TV food commercials are broadcasted during (and especially before) the lunch break. The physiological impact of marketing can be measured. Food advertising may result in triggering appetite-enhancing hormones such as ghrelin.

Participants of one study consumed the same milkshake that had been presented as a very high calorie gourmet dessert, or conversely as a very sensible low-calorie snack. The authors showed that the ghrelin hormone level soon subsided after consumption when consumers thought that they were drinking a high-calorie milkshake, while the rate levelled off after consumption when they thought they were drinking a low-calorie snack. Marketing has direct physiological effects that may be measured by brain imaging or on the basis of hormone concentrations.

The study of sensory eating pleasure as the ally of healthy eating is an emerging field of research. Neuroscientists have revealed a hedonic pathway that is stimulated when food that we like is presented. Marketing studies have also taken advantage of knowledge about the functioning of our reward system in order to stimulate it. Obesity is a contemporary social problem which leads people to ignore their natural senses when considering their diet, so food consumers are often prompted to use a restrictive rational nutrition-based approach to their diets.

More generally, there has long been a tendency to consider eating pleasure only in terms of its visceral dimension and thus as a factor promoting overeating. It is important to note that pleasure is multifaceted.

We think that pleasure could be aligned with better diets. By making the consumption experience a key factor in dietary decisions—rather than hunger satiation or price—supersizing would be naturally curbed in favour of more sensibly sized portions of yesteryear, which in turn generate the most pleasure. Contrary to choosing small portions on the basis of health considerations, often reluctantly so via self-control with a hedonic cost, choosing sensibly sized portions on the basis of sensory considerations is done without regret since one’s natural inclinations for sensory pleasure are fulfilled.

Two methods were developed to measure the effects of sensory imagery on portion size choice. One experiment was conducted in pre-schools. The investigators showed some school children three non-food images and asked them to verbalize the visual, olfactory, gustatory and tactile sensations that they evoked. These children were then asked to choose amongst six portions of cake of increasing size—they chose the fifth largest, on average. The same sensory imagery task was repeated with other children who were shown three hedonic food images instead. They opted for a portion that was two sizes smaller than the one chosen by the other group.

Simulation helps stimulate the hedonic reward system while having an impact on the portion choice. Sensory imagery prompts a preference for more reasonably sized portions and improves the expectation accuracy: those who participated in the survey consumed a portion smaller than that perceived as anticipated pleasure.

Another experiment was carried out in the experimental restaurant of the Institut Paul Bocuse Research Centre. Three groups could order whatever they wanted: one control group (1) had succinct item descriptions on the menu; another group (2) had a nutritional menu that also displayed calorie and fat contents; and the last group (3) had a sensory menu with vivid sensory descriptions. Results: compared to the control group, group 2 participants (nutrition) ate less but were less satisfied, whereas group 3 participants also ate less but were more satisfied and ready to pay more for the meal.

Cornil, Yann and Pierre Chandon (2016), “Pleasure as a Substitute for Size: How Multisensory Imagery Can Make People Happier with Smaller Food Portions.” Journal of Marketing Research, 53 (5), 847-64.

Cornil, Yann and Pierre Chandon (2016), “Pleasure as an Ally of Healthy Eating? Contrasting Visceral and Epicurean Eating Pleasure and Their Association with Portion Size Preferences and Wellbeing,” Appetite. 104, 52-59.

Ordabayeva, Nailya and Pierre Chandon (2016) “In the Eye of the Beholder: Visual Biases in Package and Portion Size Perceptions,” Appetite 103 450-57.